Over the past few years, the  growth rate of sweet drinks sales  lag behind similar indicators in other segments of soft drinks market, particularly juices or mineral water. Obviously, largely due to a tendency of increase in number of consumers, oriented to a healthy drink. Nowadays Ukrainians prefers healthy drinks, and the whole range of soft drinks sweet soda is defined as the least useful.

One of the reasons for reducing the capacity of the market of sweet carbonated water is to expand the range of non-alcoholic drinks offered Ukrainian consumer: in recent years there have appeared whole new category, for example, ice tea and coffee. Although these drinks are not yet widespread in Ukraine, their development has also increased competition on the market of non-alcoholic.

For carbonated drinks market is characterized by a pronounced seasonality. On capacious capital market in the summer of monthly sales increased by 20-25% compared with the average level. In other cities, where the overall consumption of less developed, in-season surge in sales is even more substantial, and reaches 30-40%.

The main production facilities are located in the enterprises of Ukraine Luhansk (8%) and Dnepropetrovsk (7%) regions. In areas such as Crimea, Vinnytsia, Odesa, Khmelnytsky account for 6% of the companies that produce sugary soft drinks. Pronounced accumulation of players in some specific areas is not, production is relatively evenly distributed mostly administrative centers.

In Ukraine, there is a huge selection of different soft drinks, which are producers of both national and foreign companies.

The main supplier of sweet carbonated water on the territory of Ukraine is Russia, whose share in the total import volumes for the year 2012 was 39%. Slightly inferior to it in terms of the imported product in Switzerland, Austria and Georgia, which account for 11%, 10% and 10%, respectively. Less significant supplier countries are Georgia and the Netherlands (8% and 4%). As part of other suppliers of sweet carbonated water there are 23 countries with a combined share in total imports of the product in 2012 was 18%. 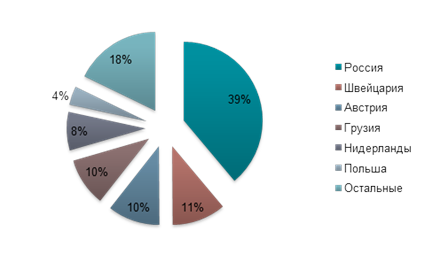 All major brands Coca-Cola presented in the category of "premium", three of them leading brand company («Coca-Cola», «Fanta», «Sprite») are in the top five in terms of popularity of carbonated beverages. 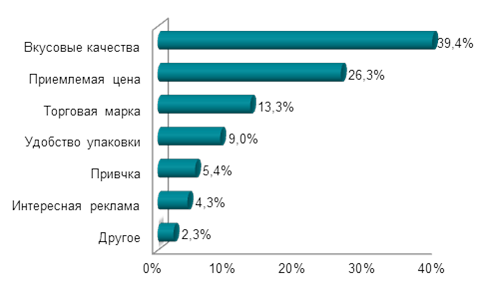 Source: according to the survey, evaluation of Pro-Consulting

Per capita consumption of soda in Ukraine is much lower compared to other countries in Eastern Europe, where the average consumer in the year drink 40-45 liters of beverages. Ukrainians tastes coincide with the global trends.

So, for example, the global leader Coca-Cola for many years has maintained a high demand for its products. In Ukraine, it is known by 84.8% of consumers of carbonated drinks, which means unconditional and unqualified popularity.

At the end of 2012 active consumers of soft drinks occupied 28.9% of the total number of buyers of the product. Regularly consume sugary water 41.7% of Ukrainians on episodic consumers have 23.6% and casual buyers - 5.8%.

This analysis allows us to trace the main trends in the development of this market, and learn about the prospects for its development in the coming years.

Analytical study of the Pro-Consulting will help you not only to correctly plan your business, but also to avoid mistakes in the future and make the most effective solutions.

For a complete description of the study and the structure you can by clicking the following link: http://pro-consulting.ua/products/detail.php?ID=127259